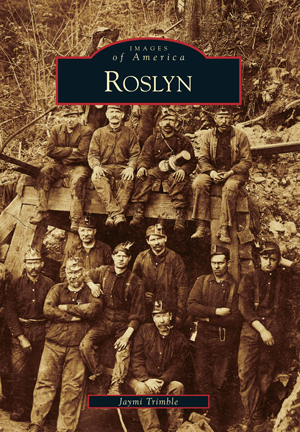 Roslyn, a mining town nestled in Washington’s Cascade Mountains, is a little town with a big history.

Founded three years before Washington was admitted to the Union, Roslyn became a boomtown after the discovery of coal. Coal was king in Roslyn for 80 years, and immigrants came from all over the world to work the mines.

Roslyn’s remarkable history includes stories of murder, a mine strike that ended with the mine boss tied to the railroad tracks, and a bank robbery some claim was masterminded by Butch Cassidy and the Sundance Kid. Readers will meet characters like Tony Bailey—he turned out to be a she—who worked the mines for 11 months in 1949 before being arrested one night in a tavern for going into the women’s bathroom dressed as a man.

And no book about Roslyn would be complete without a chapter on the hit television series Northern Exposure, which was filmed there.

Jaymi Trimble, an award-winning journalist with a master’s degree in history, visited Roslyn and fell in love with the town. With the help of Nick Henderson, president of the Roslyn Historical Museum Society, and many community members—including Willie Craven, the first black mayor in Washington State—Trimble takes readers on a journey through Roslyn’s history.