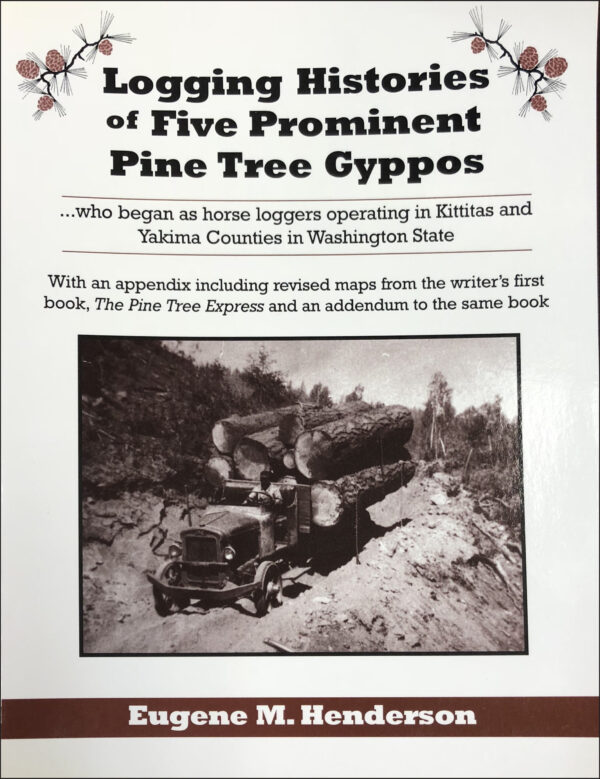 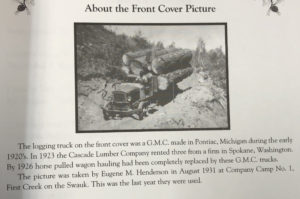 … who began as horse loggers operating in Kittitas and Yakima Counties in Washington State who progressed to a high level of ground logging mechanization during the 20th century.

Gyppo -ˈjipō/ – a logging contractor, a private operator, a logger who operates on a small budget and typically gleans the timberlands already cut by larger companies.

Between 1919 and 1985 there were five big gyppos or logging contractors who worked for the Cascade Lumber Company that began as horse loggers. They qualified as being “big” not only by their size and ability to keep the railroad reloading sites well stocked with logs, but because they endured for a long length of time. These are each chronicled in a chapter in the book:

The writer personally knew these men and had been in their late 1920 and 1930 camps. Information about their later years of operation came from the following sources:

Most of the information for Archie B. Kennedy‘s chapter came from his step-son Robert B. Kennedy, who graduated from the University of Washington College of Forestry in 1945 majoring in logging engineering. He helped the author as a pine logging consultant and supplied many of the pictures.

The Bill Hughes chapter was narrated to the author by Robert Gordon “Bud” Jones and his sister, Mabel Ness. Both supplied photos, along with Mabel’s son John Ness.

Alvin Gotch, Dominick Contratto‘s son-in-law, supplied the author with most of the information and some of the pictures of the Contratto Brothers Logging Company work years. An interview with Nellie, Dominick’s widow, provided additional facts and insights.

The largest of these five gyppos was William G. (Bill) Taylor and his son, Chester A. Taylor. Chet, who many times sat at the head of his dining room table answering the author’s questions and discussing logging with him, provided nearly all of the information and pictures comprising that chapter. Many of those photos were taken by Pearl Taylor, Chet’s mother.

The chapter featuring Lo Driver and his contract logging years, while regretfully incomplete due to the passing of the contractor after only one interview, several informal conversations and one newspaper article written by Lo, does not mean that his accomplishments were in any way inferior to the other four contractor histories. The author also mentions that the full story about the Milt Ashley and Elbert Beattie logging experiences are not included in this volume. However, he gives brief accounts in the introduction that are definite indicators that proclaim without doubt that those two contractors rank among the dominant central Washington pine contract loggers.

The last chapter about horse logging comes mostly from the author’s own experiences and from the late Donald E. Colwell, and Chester A. Taylor.

Writer Eugene M. Henderson said, “Thanks also goes to my chief proofreader and writing consultant, my son, Edward L. Henderson, whose college major was English, and who had had considerable teaching and writing experience. Last but not least, I am indebted to my wife, Charlotte, for the many hours spent typing and retyping all that I have written.”