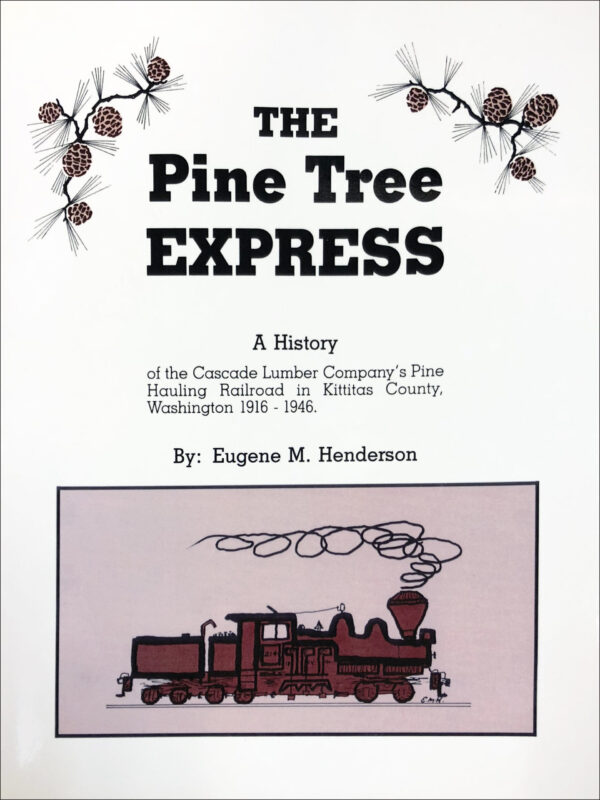 Limited quantity now available. Due to the popularity of Eugene M. Henderson’s books, we have acquired the remaining inventory of the final printing of this book, and the author’s other book, Logging Histories of 5 Prominent Pine Tree Gyppos,

This book, packed with intrigue, historic photos of Kittitas County logging train operations, maps and illustrations, is very popular with railroad fans, people interested in the logging industry, and history buffs. It is part of a 2-book series by this author. The second book, Logging Histories of Five Prominent Pine Tree Gyppos is also available.

Many of the fascinating moments in American history took place in conjunction with the railway expansion ventures of the nineteenth century. No sooner had this era come to an end than another type of pioneer railroading enterprise began spreading its influence. This was the use of railroads by lumber companies as the chief means of transporting logs from the place where they were harvested to the various company sawmills.

As romantic and action-filled as the early trunk line transportation dramas appear to have been, the history of logging railroads consistently surpassed the much larger mainline carriers in their rate of unusual happenings and intrigue.

This is an account of one lumber company’s railway system – The Cascade Lumber Company whose mills and head offices were in Yakima, Washington, but whose extensive land and timber holdings were in Kittitas County, Washington, approximately fifty to eighty miles north of Yakima.

When Cascade started logging in 1903 the twelve to eighteen foot long Ponderosa pine logs with a small number of Douglas fir and Tamarack species mixed in, reached the Yakima mill by floating them down the Yakima River. In 1916 this method of transportation was replaced by the rail line. Thirty years later another step towards modernization forced the abandonment of the railroad in favor of truck transportation.

Previous to the 1916 railway debut, two other romantic railway dramas had been played out in Kittitas County. One was the Northern Pacific’s perilous years beginning with its completion from Yakima to Ellensburg in 1886. The building and use of switchbacks over Stampede Pass for the next two years resulted in:

With the completion of the tunnel under Stampede Pass in 1888, the drama slowed up a bit but still continued to provide a number of exciting events up until about 1920.

The second railroad drama was the Chicago, Milwaukee and St. Paul Railway steam era beginning in 1908 and just before its completion to Seattle in 1909, this lasting until the stretch from Othello to Seattle was entirely electrified by 1918.

All who have ever worked for backwoods railway systems will attest to the fact that there was never a dull moment while employed in this kind of work. To successfully survive, an unusual dedication to alertness at all times was an absolute requirement.

The following brief history of Cascade’s railroad logging era from the time of its conception in 1912 – 13 to the scrapping and disposal of rolling stock, rails and other equipment in 1949 – 1954, is dedicated to all of those Company employees who had anything to do with the various railroad activities directly or indirectly and even for short periods of time.