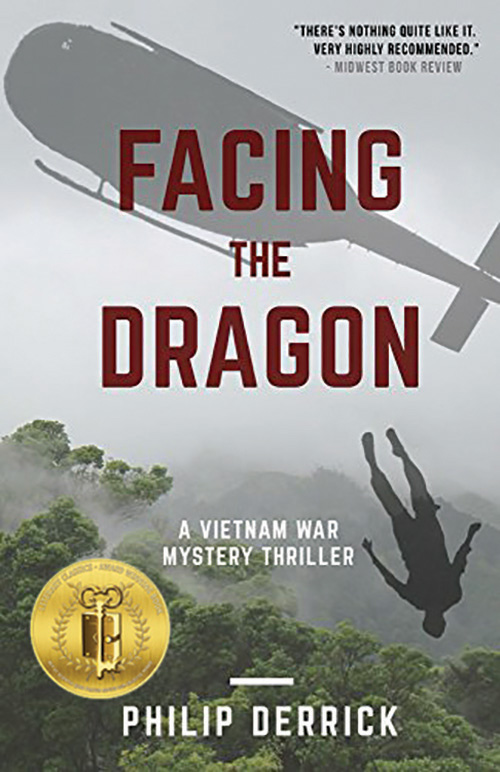 A hitchhiker. A cavern. A series of murders spanning twenty five years.

January 1970 – Just over a week ago James Peterson was a high school freshman whose biggest worry was passing his Geometry class. Now he’s in South Vietnam impersonating a army paratrooper. He’s not there for glory but to make up for his cowardice and solve a mystery. But can a fifteen year old boy survive without any military training? Can he find the answers he seeks? Or will someone see that he’s shut down permanently? 2.4 million men served in South Vietnam. Join the adventure and meet the most unusual one of all.

“There’s nothing quite like it on the market. Very highly recommended.” – Midwest Book Review

“One of the best of the Vietnam War thrillers. Derrick is a master storyteller.” – Military Writers Society of America

“Derrick builds his story with bricks, and the foundation is rock solid and incredibly clever. A chilling thriller. Five stars.” – Readers Favorite

“A powerful novel, rich in historical detail and excellent characterization. I can’t recommend it highly enough… From its gripping opening to it’s heart-pounding climax, this was a book I couldn’t put down.” – San Francisco Book Review

Philip Derrick was brought up as an Air Force brat before disappointing his father and joining the Army. After volunteering for Vietnam, he served a tour with the 2nd Infantry Division on the DMZ in South Korea. He is a life member of the Veterans of Foreign Wars.

Following college on the GI Bill he became a probation officer. This came to an abrupt halt several years later when he had to disarm a disgruntled drunk ex-marine of a shotgun on the main street of town one night. He figured there had to be a safer line of work.

The result was a Ph.D from the University of Idaho and career change into higher education as a professor and Dean of Students. Later he became a high school football coach (121-60 record) and history teacher enabling him to both coach and teach each of his three sons. It was a great experience despite having his house toilet papered twice.

He has been on the TODAY show and interviewed by Brian Williams on the NBC Nightly News. But he’s also had his house burn down with 60 others in a wildfire. Easy come, easy go.

He currently lives in the Cascade mountains an hour from Seattle and watches the deer pass by his living room window on a daily basis. In his study are more than 1,000 books, none of which his spouse allows outside the room since he otherwise leaves them lying around all over the place.

He can be contacted at philipderrick.com. 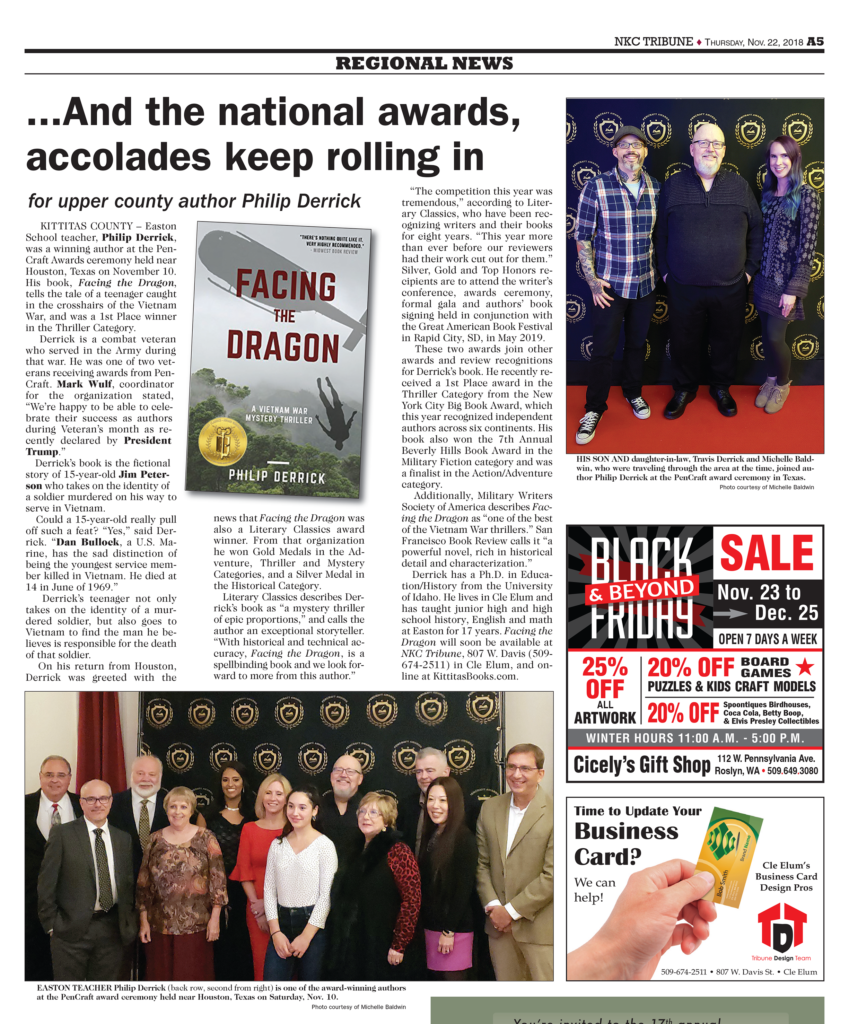 Article from the Northern Kittitas County Tribune reprinted with permission …And the national awards, accolades keep rolling in – for author Phil Derrick –  KITTITAS COUNTY – Easton School teacher, Philip Derrick, was a winning author at the PenCraft Awards ceremony held near Houston, Texas on November 10. His book, Facing the Dragon, tells the tale of a teenager caught in the crosshairs of the Vietnam War, and was a 1st Place winner in the Thriller Category. Derrick is a combat veteran who served in the Army during that war. He was one of two veterans receiving awards from PenCraft.

Mark Wulf, coordinator for the organization stated, “We’re happy to be able to celebrate their success as authors during Veteran’s month as recently declared by President Trump.”

Derrick’s book is the fictional story of 15-year-old Jim Peterson who takes on the identity of a soldier murdered on his way to serve in Vietnam.

Could a 15-year-old really pull off such a feat? “Yes,” said Derrick. “Dan Bullock, a U.S. Marine, has the sad distinction of being the youngest service member killed in Vietnam. He died at 14 in June of 1969.”

Derrick’s teenager not only takes on the identity of a murdered soldier, but also goes to Vietnam to find the man he believes is responsible for the death of that soldier.

On his return from Houston, Derrick was greeted with the news that Facing the Dragon was also a Literary Classics award winner. From that organization he won Gold Medals in the Adventure, Thriller and Mystery Categories, and a Silver Medal in the Historical Category. Literary Classics describes Derrick’s book as “a mystery thriller of epic proportions,” and calls the author an exceptional storyteller. “With historical and technical accuracy, Facing the Dragon, is a spellbinding book and we look forward to more from this author.” “The competition this year was tremendous,” according to Literary Classics, who have been recognizing writers and their books for eight years. “This year more than ever before our reviewers had their work cut out for them.” Silver, Gold and Top Honors recipients are to attend the writer’s conference, awards ceremony, formal gala and authors’ book signing held in conjunction with the Great American Book Festival in Rapid City, SD, in May 2019.

These two awards join other awards and review recognitions for Derrick’s book. He recently received a 1st Place award in the Thriller Category from the New York City Big Book Award, which this year recognized independent authors across six continents. His book also won the 7th Annual Beverly Hills Book Award in the Military Fiction category and was a finalist in the Action/Adventure category. Additionally, Military Writers Society of America describes Facing the Dragon as “one of the best of the Vietnam War thrillers.” San Francisco Book Review calls it “a powerful novel, rich in historical detail and characterization.” Derrick has a Ph.D. in Education/History from the University of Idaho. He lives in Cle Elum and has taught junior high and high school history, English and math at Easton for 17 years. Facing the Dragon (edit:is now) available at NKC Tribune, 807 W. Davis (509-674-2511) in Cle Elum, and online at KittitasBooks.com.