Ghosts of Leavenworth and the Cascade Foothills – by Deborah Cuyle 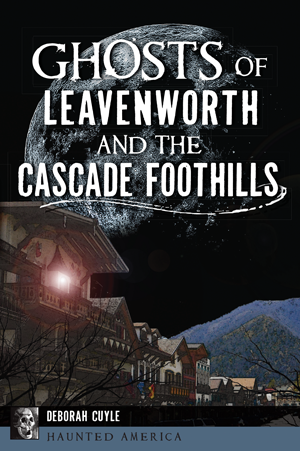 The spirits of the early pioneers still roam the streets of Leavenworth and lurk in the lengthening shadows of the surrounding hills.

Chas Gordon’s murder sits unsolved after a century of mystery, as does the location of the lost Ingalls gold.

Muffled sobs mark out the Thorp Cemetery, while a ghostly hand coaxes a soft tune from the piano in the lobby of the Tumwater Inn.

Saloon shootings and railroad tragedies left their own legacy of restless souls.

Author Deborah Cuyle reveals the fascinating history behind the ghost stories from this corner of the Cascade Mountains.

Originally from Upstate New York, Deborah Cuyle now lives in Snohomish, Washington, and loves everything about small towns. She has written three other books: Kidding Around Portland, Oregon; Cannon Beach, Oregon; and Haunted Snohomish. Her passions include local history, animals, the beach, art and writing. Her historic Snohomish farm is home to multiple rescued animals, including a grouchy three-legged cat and a pony named Minnie Winnie Butterball. She also provides a horsemanship program to Girl Scouts. Deborah enjoys thinking about the possibility of an afterlife and especially loves telling a chilling ghost story while nestled beside a bonfire with her best friends and family.