Images of America: ELLENSBURG – by Andrew Caveness and the Ellensburg Public Library 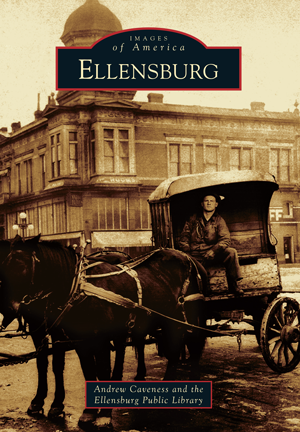 Ellensburg began as a small trading post in the picturesque Kittitas Valley in the early 1870s.

Northwest Native Americans praised the area for its centrality in the region, which Seattleite John A. Shoudy quickly realized. When Shoudy sought to secure a wagon road from Seattle to Eastern Washington, over the Cascade Mountains, the trail led him to the Kittitas Valley. Shoudy purchased a small trading post from A. J. Splawn and began the town that he named for his wife, Mary Ellen Shoudy.

Ellensburg was almost chosen as the state capital in the late 1880s, but instead it was awarded a State Normal School as a consolation. With a bustling downtown district, a railroad passing through town, and a public university, all the while remaining steeped in the local agricultural and rural setting, Ellensburg quickly became a diverse and thriving city.

Andrew Caveness came to Ellensburg in pursuit of a master’s degree in history and fell in love with the rich history Ellensburg has to offer. Working with Milton Wagy, the dedicated local-history librarian at the Ellensburg Public Library, Caveness has pieced together the city’s unique and entwined history, bringing the people and places of Ellensburg to life.
: 9780738571546
: Arcadia Publishing
: 12/07/2009
: Washington
: Images of America
: 187 Black And White
: 128
: 6.5 (w) x 9.25 (h)