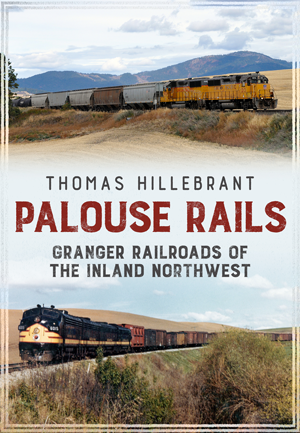 The Palouse region of Eastern Washington and North Idaho produces the highest yields of any wheat-growing district in North America, followed closely by farmlands in the adjoining Walla Walla and Camas Prairie regions.

Early farmers clamored for railroads to carry their harvests to world markets, and soon a veritable spider’s web of competing rail routes left few corners of the Inland Northwest untouched. Some lines also reached into nearby forests to haul timber to local sawmills and ship out finished lumber.

As the principal transporter of people and goods prior to World War II, railroads served an integral role in the communities they served. Despite traffic losses to competing trucks and river barges, railroads still haul considerable grain and wood products tonnage on these lines today.

Palouse Rails tells the stories of seven major railroads serving these regions, from their origins to the present day, through the eyes of contemporary railroad photographers. These images capture the railroad equipment, locations, personnel, and operations that, for generations, have connected Inland Northwest’s agricultural regions with each other and with the world.

THOMAS HILLEBRANT grew up in Spokane, Washington, with a deep fascination in the history and operations of railroads serving the Inland Northwest. He has a particular interest in branchline and shortline railroads that once connected, and in many instances still connect, small communities with the rest of the nation. He enjoys collecting and sharing stories and photographs of these railroads to preserve their history for both ardent and casual rail enthusiasts. Employed as a mechanical engineer, Thomas lives in Richland, Washington, with his wife, Nici, their four children in various stages of “leaving the nest,” and four cats.