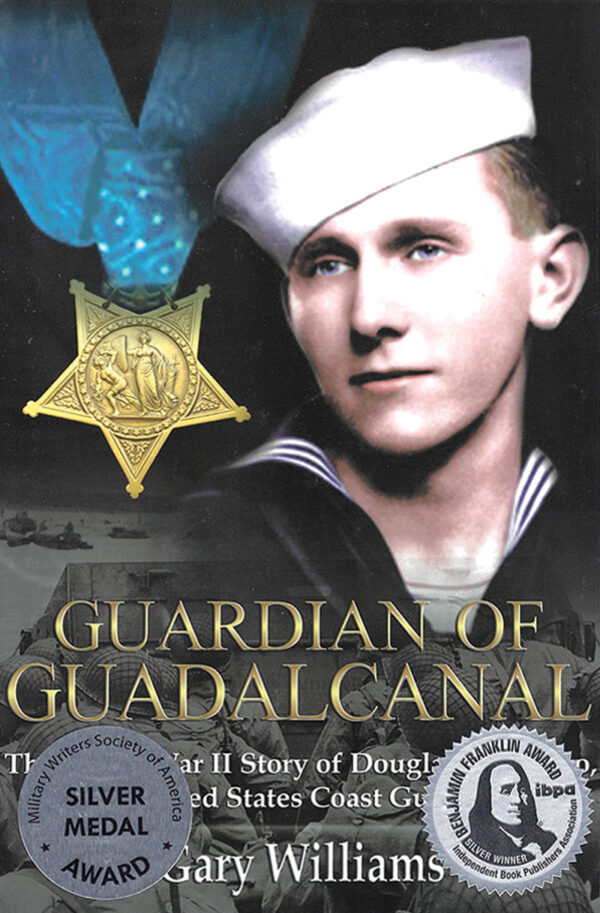 Kittitas County Connection: Douglas A. Munro’s childhood home is in South Cle Elum, WA, and he is laid to rest with warship turrets in Cle Elum Cemetery.

Douglas Munro joined the Coast Guard intending to be a Quartermaster. But the winds of war dictated a higher need for Signalmen, as the Coast Guards operated jointly with the Navy at levels never repeated. There was no eight-week Basic Training course in 1939. A new recruit was indoctrinated, vaccinated, and issued a uniform. Back then, you became a Third Class Petty Officer through regular self-study, practice, and performance. That is how Douglas Munro earned the Signalman Designator while aboard the CGC Spencer.

Douglas Munro was exceptionally mission-focused, understanding that the war itself was won a single, bloody battle at at time, and that success on Guadalcanal was an imperative to success in the South Pacific Theater.

“Author Gary Williams brings us a true American war hero in his World War II Story of Douglas a. Munro. The book is appropriately titled Guardian of Guadalcanal. The account of Munro’s heroic actions during the battle for Guadalcanal made it very clear to me why the Marine Corps., to this day, has so much respect for this former member of the U.S. Coast Guard. It’s easy to see that the author extensively researched both Munro’s life and the combat on Guadalcanal. Once the research was done, Williams did a very good job in presenting us that story along with dozens of photos, award citations, and maps. If you like reading about American war heroes, this story of Douglas Munro, the Guardian of Guadalcanal, should definitely be up high on your list!” – Bob Doerr, Military Writers Society of America (MWSA)

“In Guardian of Guadalcanal, Gary Williams captures the essence of Douglas Munro, who, despite mortal injury from courageously positioning his small craft to block enemy fire, his only thought in his final moments was for the mission.” – VADM Sally Brice O’Hara, 27th Vice Commandant, United States Coast Guard (Ret.)

“Douglas Munro is my hero of heroes, and his story Guardian of Guadalcanal defines what selfless service is all about. I can assure you from my years of telling the Munro story, his spirit of home and compassion will follow you forever.” – Vincent Patton, III, Ed. D., 8th Master Chief Petty Officer of the Coast Guard, (Ret.)

“Guardian of Guadalcanal accurately tells the story of Signalman First Class Douglas Munro, USCG, who died, while placing his own life in jeopardy, coming to the aid of five-hundred Marines on the beaches of Guadalcanal. His actions are as relevant today as they were over seventy years ago. Semper Paratus.” – GM2DM Daniel Cannode, United States Coast Guard, Vietnam

“It was a privilege to serve aboard CGC Munro, namesake to Medal of HOnor recipient Douglas Munro. His heroic actions inspired the crew and provided the ultimate example of the Coast Guard core values: Honor, Respect, and Devotion to Duty. Semper Paratus!” – Jody B. Nummer, GMC, USCG, (Ret.)

Gary Williams currently serves as a Director of Graduate Programs at the Freedoms Foundation at Valley Forge. He is the multi-award winning author of SEAL of Honor: Operation Red Wings and the Life of LT Michael P. Murphy, USN; Heart of a Lion: The Leadership Skills of LT Michael P. Murphy, U.S. Navy SEAL; Guardian of Guadalcanal: The World War II Story of Douglas A. Munro, United States Coast Guard; and Siege in Lucasville: An Insider’s Account and Critical Review of Ohio’s Worst Prison Riot as well as co-producer of the critically acclaimed and Academy Award considered documentary MURPH: The Protector. He holds a Bachelor of Science in Leadership/Training from Franklin University and a Master of Public Administration from the University of Dayton. He and his wife Tracy have six children and live in Marion, Ohio.