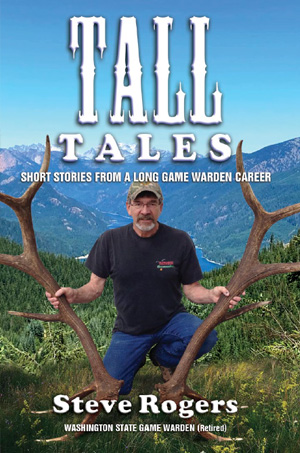 Tall Tales is a short peek into the sometimes exciting, often funny, and occasionally scary 33 year career of Washington Fish and Wildlife Police Officer Steve Rogers. From trapping beaver, raccoons, and cougars to herding elk on snowmobile to catching poachers, there were not many dull moments. Whether horse packing into the high country or running boat patrols on the Columbia River and undercover fishing patrols, there was always plenty of work to do. There was never a quiet deer or elk season in Central Washington, especially when there were antler restrictions involved. Rogers worked with a wide variety of people from fellow Washington Game Wardens and Biologists, to Forest Service Agents, and Officers with County, City, and State Agencies. He forged lasting friendships with many trappers, sportsmen, and fishermen. He also made a few enemies that had no sense of humor. There must be humor in this line of work. One final note – not a good idea to write your local Sheriff a ticket.

This book is also dedicated to the memory of Washington State Trooper Steve Houle who was recently killed in a snowmobile avalance. A wonderful guy and friend. Gone but not forgotten.

“In the non-fiction book TALL TALES, author and retired Game Warden Steve Rogers provides his readers with a collection of fascinating short stories. From humorous tales to a detailed description of a police shooting Steve was involved in, this book will hold your attention from cover to cover. Whether a fellow game warden, or someone who supports anti-poaching efforts, this book will not disappoint you.”

(reprinted with permission from the Northern Kittitas County Tribune, March 25, 2021)

SOUTH CLE ELUM – It’s always a thrill to announce another book written by an Upper County local. This time around it’s the one authored by retired Washington State Fish & Wildlife game warden Steve Rogers, a resident of South Cle Elum. The title of his book is: Tall Tales – Short Stories from a Long Game Warden Career.

For this 26-chapter work of a lifetime, Steve pans the gold nuggets from his 33-year career back in the day, as he would tell you with wink and a smile, when there were game wardens – not Fish & Wildlife police officers as they’re known today.

“Everybody called me a game warden so that’s what I was, an old time game warden,” he laughed. “I thought the world was coming to an end when they put a computer in my truck.”

Sitting down to write a book is just the first hurdle writers must overcome, but in Steve’s case he had a little help. “My long-time friend, Jim Fossett, actually put the idea in my head by suggesting I write some stories for the newspaper. He was very helpful and offered to read and edit anything I wrote down.

“I started writing early last summer. I had so much free time with the COVID-19 restrictions I found myself sitting on my butt. One day the thought crossed my mind that you really had to have a sense of humor to do what I did for 33 years on the job. Well, that thought led to another and I got started.”

He explained that his writing routine wasn’t based on a formula, nor was it driven by discipline or ruled by stoicism. He didn’t lock himself away in solitary confinement with a canteen of water and a supply of trail mix until it was done.

“My writing habits were sporadic. I’d go at it full bore for a few days and then break for a week or so before I sat down again.

“I did a lot of rewriting, too, changing and correcting.

“My biggest challenge was story continuity. I found myself skipping around quite a bit and had to go back and rearrange paragraphs for a better read. Then I’d add stuff and have to rearrange some more. There may have been a little embellishment, too.”

He said each chapter embraces a different story.

“I had lots of recollections of my experiences, some of them humorous. For instance, there’s one chapter about my old horse No-Name and our exploits in the backcountry together.”

He said another chapter captures the times he worked undercover using deer decoys.

“There’s also a story about a shooting in Cle Elum, and a contribution from my wife, Cindy. She wrote from her perspective as the wife of a game warden. It’s pretty interesting. Actually, she wrote it to read at my retirement party in 2011, but because we all know how much she ‘loves’ speaking in public, I decided to include it in the book, instead,” he laughed.

Steve’s trademark sense of humor harmonized well with his tongue in cheek regalement of the story about an ‘anonymous’ local.

“I don’t mention names of locals in my book – but people who live here will know who I’m talking about. In one story I included this: “If you’re reading this – I know what you did,” he laughed.

“That was definitely my tongue in cheek coming to the surface.”

As mentioned, there is no connection between chapters. Each one stands alone as a unique species of life in the wild, if you will.

“Overall, some of the stuff in the book goes back to my days in Tacoma as an animal control trapper, and then I kind of skip around in time, but most of it is about stories I collected right here in the Cle Elum area.”

Having witnessed the ordeal first-time book writers have to go through to get a book ready for publishing and sale, Steve surprised me.

“I had a lot of good help. It went smoothly. Retired game warden and author Todd Vandivert, an old friend, helped me get the book formatted and published by Amazon as a paperback and as a digital version for Kindle.

“Todd got me hooked up with graphic designer Bruce Wiehl, another retired game warden who does book covers. Both of them are heavily involved with International Game Warden Magazine.”

Now that the first book is out – in less than a year – what’s next?

“Actually, it’s been a shock to my system. I can’t believe it actually happened, but I do know this: I hope I don’t make enough on the book to have to pay Uncle Sam,” he laughed.

Since he retired in 2011, Steve hasn’t dropped very far from the tree.

“Cindy and I spend a lot of time in the hills in our Jeep camping and hunting. We love doing that.”

The couple has also been heavily involved with Cascade Field & Stream.

“We joined in 1985 and we’re still members. I was vice president a couple of times and acting president. Cindy was secretary for about ten years.”

Get the book locally

At this writing, Steve said he’s in the process of working with the NKC Tribune to have copies of his book available in the newspaper’s office supply store as soon as he gets the first 100 copies printed. [UPDATE: copies now available at KittitasBooks.com online or the bricks and mortar Tribune Office Supply & Printing’s “book nook” inside the store at 807 W Davis St., Cle Elum, WA 98922, near Safeway.] 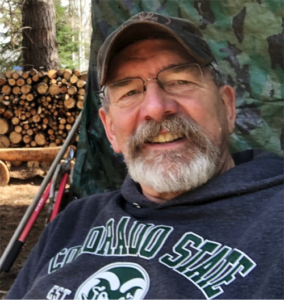 Steve Rogers grew up the oldest son of an Air Force Officer, living in North Africa, D.C. and London. He graduated high school in Nebraska in 1967, and joined the US Navy. After four years in Naval Intelligence he attended Colorado State University on the GI Bill. Steve graduated in 1977 with a B.S. in Wildlife Biology. After graduation he worked a season at Vermejo Park Ranch in Raton, NM, helping with elk studies, patrolling the many lakes, and guiding elk hunters in the fall. He was hired with Washington Game Department in Jan. 1978 as a Game Farmer on Whidbey Island, moving up to Wildlife Damage Control in Tacoma, Wa. and finally to Fish and Wildlife Enforcement in Cle Elum, Wa. He retired in Cle Elum after 33 years to enjoy the beauty, hunting, and fishing in the area with his wife, Cindy.